“In Addition to Losing my Son, I Also Began Leaking Urine” – Mwanarabu’s Story

My name is Mwanarabu Mwambasa, and I come from Vihiga County in Western Kenya. I am 20 years old and I am educated up to class 8. I have lived with fistula for five years now, and this is my story. 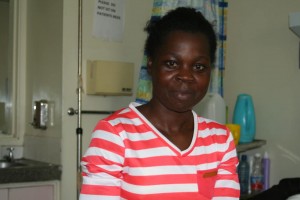 At the age of 15 years, I fell pregnant. It was a relatively uneventful pregnancy since I didn’t experience any significant challenges. If only I could say the same of the labor!

When I went into labor, I trekked to the nearest public hospital where I had been undergoing my antenatal clinics. But I was in for a rude shock because the government nurses were on a nationwide strike, meaning there was no one giving care to patients and those seeking services, including pregnant women such as myself. There were only few volunteers, mostly retired nurses.

I was in labor for endless hours, just hoping for the best. Eventually, when the volunteers arrived to attend to me, they told me that my baby was already dead. Apparently, I had been in labor for too long. I was also informed me that because of my age and diminutive structure, I needed to have the foetus removed through a caesarean section. I was sad to hear that because I had been looking forward to becoming a mother. I was taken to theatre where they delivered my dead son. I went on to stay in hospital for two weeks as I recovered, where I continued being attended to by volunteers.

But my agony didn’t end there. Upon my return home, I noticed that I would wet myself like a baby. I couldn’t understand why this was the case, but I hoped that as my caesarean wound continued to heal, then the urine would stop leaking too. I nevertheless became ashamed and withdrawn because of the foul smell that would be with me constantly. It became very embarrassing to be in the presence of people, because they would begin holding their noses around me.

In fact, the most taunting comments came from my peers –fellow girls. They would refuse to hang out with me, and immediately walk away when I approached them, or when I walked into a room. I became so broken, to the point that I contemplated suicide. I was young, an outcast who was shunned by my friends. My son was dead, and I therefore felt that I had nothing to live for.

I decided to live a solitary life at home. I stopped going out to social places such as the church, to the market and other places where young girls would gather. I also decided to stop visiting friends, because while at their place, they would offer me a cup of tea or water to drink and immediately I did so, I would start leaking urine and hence stain their seats. I chose to stay home instead.

This went on for years until sometime in June this year, when a neighbor who works in Nairobi told me that there would be a free hospital camp for women who had a problem such as mine. Having witnessed the agony I had undergone over the years, and knowing I couldn’t afford the transport costs, she sent me money for my bus fare and I made my way to Kenyatta National Hospital (KNH) in Nairobi. When I got there, I was registered, evaluated by the doctors, and scheduled for the surgery, which went on successfully. 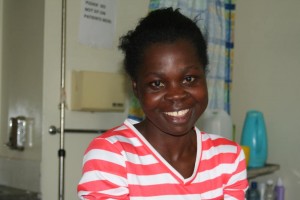 Today, as I recover at the KNH wards, I beam with happiness because I feel as though I am starting my life afresh. It has been a difficult five years where I was unable to accomplish much, because I was always in the house. Now I feel confident that I will be able to go out and even look for work and be able to earn my living.

I am grateful to all the people who made this surgery possible, because it helps people like me from the rural areas who are not able to afford such treatment. Thank you FDSA, FFF and other partners for giving me a new lease of life!