This year’s free fistula medical camp organized by the Flying Doctors Society of Africa and the Freedom from Fistula Foundation took place between 11 – 18 June 2015 at the Kenyatta National Hospital. Among the recipients of this noble venture was Rose Nyambura, a 31 year-old single mother of one. Rose, from Murang’a County in Central Kenya is one of the rare cases that was observed during the camp.

All of Rose’s childhood memories are largely of her padding her inner wear with pieces of old clothes and bedsheets.

“At the age of three years when all my peers had graduated from using nappies and were now potty trained, I would still be dressed in nappies. For some reason, I continued wetting my pants just like a little baby. But even though I was only three years old, I knew that there was something wrong with me,” she says. 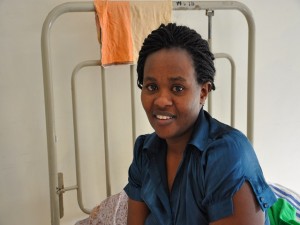 When she began pre-school at the age of four years, it became impossible for her to go to school with a nappy, something that invited the wrath of her mother.

“My mother would scold me, accusing me of behaving like a baby. Each time I wet my pants she would give me a thorough beating. Despite my promises I made to her that I would stop urinating on myself, my urine continued flowing freely, much to my dismay. My mother’s beatings intensified,” a sad Rose remembers.

At the age of nine years, and fed up of her mother’s beatings, Rose devised a strategy to deceive her mother.

“I ransacked the house for old clothes, towels and bedsheets, and cut them into neat little pieces. I would then stuff the pieces of cloth in my panty, which would then contain my urine. I would change the pieces of cloth when they felt full, just before they soiled my clothes. Each night, I would gather all the used pieces of cloth, wash them and secretly hang them out to dry, carefully not to let my mother know. Thankfully, this strategy worked perfectly for my mother stopped scolding me, congratulating me for finally ‘growing up’,” she remembers.

This is a routine she religiously practiced until she completed her primary schooling at the age of 14 years. But then, a new challenge loomed when she had to report to a boarding school for her secondary education. In a community where a dorm hosted hundreds of girls, how would she successfully keep her secret?

“Believe it or not, I managed to hide my urine leak problem from my entire school community. Nobody ever got to know about it for the entire four years. But this time round, I did not use old pieces of cloth. All the pocket money I would be given by my parents would go to buying pads, which would contain my urine. Every minute, every day of my secondary and college education, I had a pad on,” she says.

Soon after completing college, Rose decided to get pregnant, hoping that it would cure the leaking problem. She conceived and carried her pregnancy to term. However, something went awfully wrong during the birth.

“My baby came out with his hands first. By the time they were getting his whole body out, he was already dead,” she says.

Undeterred by that unfortunate incident, determined to put to an end her leaking problem, she got pregnant again soon after. This time round, she delivered a healthy baby girl. But it still did not solve her problem. She continued leaking urine.

“I was so sure that pregnancy would solve my problem but after being pregnant twice and observing no improvement, I gave up and decided to fully accept that I would leak urine for the rest of life. I became content with putting on pad every single minute for the rest of my life even though I was not always on my period,” she says.

But all that changed one day when she was listening to her favourite radio station –Inooro FM, the Kikuyu vernacular station broadcast by the Royal Media Services. The announcement called on all women who leaked urine to make their way to Kenyatta National Hospital for free fistula repair services. She wasted no time in boarding a vehicle to the capital city.

Thankfully, she was selected as one of the beneficiaries of the surgical procedure, which saw her congenital vaginal fistula repaired. Rose was born with a fistula, hence her inability to control her urine right from birth.

After the successful surgery, Rose decided to inform her friends and relatives the secret she had kept three decades.

“When my mother leant of my surgery, she was completely shocked. She had thought my leaking urine problem had stopped when I was nine years old. She was so remorseful, sad that I had never told her that it had never really stopped,” Rose says.

Rose is one of the 11 women from Murang’a country who benefited from free fistula repair surgery at this year’s fistula camp organized by the Flying Doctor’s Society of Africa and the Freedom from Fistula Foundation. A total of 208 women suffering from fistula were successfully operated on -free of charge. 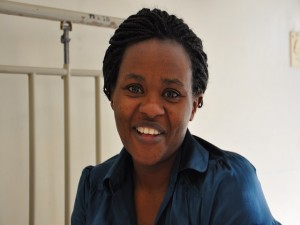 As she recovers from the surgery, Rose describes her feeling as ‘strange’.

“I have never had a dry feeling in my genital area. I have always been wet. I feel as though I am naked right now. I fee strange, odd. This is a new normal for me, a welcome one albeit. All I can say is thank you to the FFF and FDSA and the team of doctors and nurses who have given me a genuine reason to smile.”