This is Esther’s story which was revealed to us during the Kisii Fistula Camp:

Esther Kwamboka from Kisii 19 years of age narrates of how she became pregnant while still in school. I had gone to school as usual and I received a call from my boyfriend who requested me to escort him to the nearby centre we talk. When we reached the centre he asked me if I can go to their home then he would escort me back to school.

Everything changed when I arrived there “he locked me in his room for 2 weeks, everyone was looking for me…”. My parents, teachers and fellow students started looking for me and could not find me since my boyfriend had switched of my phone. When I realized I was pregnant I didn’t see the need to go back home I knew my parents were annoyed with me, “I choose to stay with him, since I was already pregnant”. 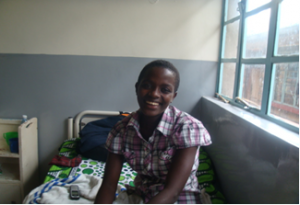 One day as I went to the market one of the students spotted me and went and told my parents, its then that they located where I was and our parents had a meeting and they decided to leave me “my mum was very disappointed with me” says Esther. When time came for me to deliver I went to hospital and I had a baby girl who is now 3 years old.

When I came back home my husband started mistreating me when I was told to abstain for 3 months, and I also realized I was leaking urine especially when we had sexual intercourse, its then that he started avoiding me and having affairs. He told me he didn’t have money to treat me. I decided to stay thinking he would change his mind, but its then that he started having affairs with other girls and we started arguments. He bet me a couple of times and I ran away to my parents home, he followed me there and apologized to my parents and said it will never happen again so we went back home together. After 2 months the problems started again and I ran again to my parent’s home with my daughter.

He never came again to look for me or my child and I decided that I will never go back to him again. I plan to go back to school and finish my education and have a formal course in hope of getting a better job and I raise my child.