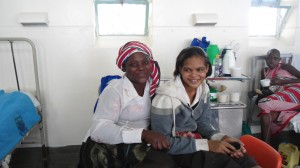 Carol (in the scarf) with a friend at the hospital

Carol Atieno, 29 years old, comes from Kasarani. Her problem began in 2006 when she became pregnant. When delivery time came, she endured labour pains for about a week before going to hospital. When she got to the hospital she was told that she couldn’t deliver normally and was taken for surgery.

“After the surgery I realized that I had no control of my urine and told that the baby was in distress. The nurses tried to resuscitate the baby, however, after four days the baby passed on. I was informed it was a boy. I was hospitalized for a month and my legs were very weak at that time. I was referred for physiotherapy for one month and after recovery I was discharged.

It became hard for me when I went back home. I stayed locked in because I thought I was the only one with this condition. In my family I was the only one who had undergone an operation for delivery. I didn’t understand what was happening to me, my life wasn’t okay.

I hated myself and even restrained from taking water, porridge, and even tea so that I would not need to urinate. I tried going to hospitals to seek medical attention and was asked to pay Ksh .3000/- which I didn’t have. I even went to Moi Referral Hospital in Eldoret (about 300km North West of Nairobi) and was told to wait until they hold a camp but they also referred me to Kenyatta Clinic 66. I later found my way back to Nairobi and went to Kenyatta and was informed that they had a camp in a month’s time and was booked and told to come end of May.

This condition made me lose hope and I felt sorry for myself. It mostly affected my social life and I couldn’t go to visit people freely or even went to church briefly to avoid messing myself. I am much better now after surgery and can visit my family without any reservations.

I would like to encourage and sensitize others with this condition (fistula) to come out and get help, I know most people believe that surgery is expensive but am glad we are getting treatment for free and I encourage them to come and get assistance for Free. Thank you AMREF for the support you have given us as women…Be Blessed.”