Alice Awino, a 20 year old lady from Siaya district narrates the story about her life after child birth. 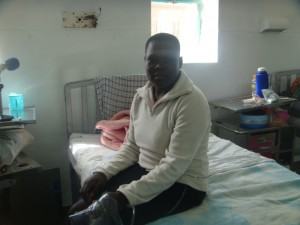 I became pregnant at the age of 14. I was in class four then and when I was due, labored at home for three days before going to hospital. The aunt who was my guardian refused to take me to hospital and took me to a traditional birth attendant (TBA), I tried to push the baby but was unable to. It’s then that the TBA proposed that I should be taken to hospital.

On reaching Siaya hospital they immediately referred me to Kisumu Provincial hospital but by then I was unconscious and had already lost my baby. I didn’t see my baby but the doctors told me it was a boy. I realized I couldn’t walk after delivery and was hospitalized for a period of 2 months and I also had no control of urine .I continued with therapy even after discharge and after one year I was able to walk well and despite leaking urine I went back to school.

Determined to finish school, I continued despite being teased and being called names by my fellow pupils and people in the community. They ridiculed me and always asked what was wrong with me because I stank of urine all the time. After another 3 years, when I was just about to finish my primary education, I became pregnant again. This time I delivered normally at home and the baby survived, but after 3 months the baby passed on due to short illness.

I was excited to learn about the free fistula medical camp over the radio and I immediately begged my sister to send me money for bus fare in order to travel to Kenyatta Hospital for treatment. Having gone through the operation, my life has completely changed. I am so happy and I can now wear white clothes without any fear. I am no longer an outcast in my community and can go about my activities without fearing any negative reactions from those around me. Finally I pass my gratitude to the team of doctors for free treatment. My life will never be the same.